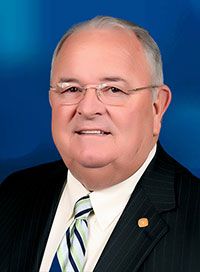 I am a life long resident of the Town of Woodworth, married to Linda M. Butler for some 56 years, (SAME LADY, now deceased), father of 2 children and have 5 grandchildren (1 deceased) and 1 great grandchild. I am a member of the Calvary Alexandria (Baptist), serving on the inactive deacon board.

I am a graduate of Lecompte High School, attended various management and governmental courses with LSU’s continuing education division in Baton Rouge.  I began my work career with the National Automotive Parts Association (NAPA) in early 1962.  In 1963, I accepted a position with the Boeing Company (Aero Space Division) on the Apollo Project, man’s space flight to the moon.  In 1968, I accepted a position with Delta Air Lines and worked in New Orleans, Baton Rouge and Alexandria, retiring in 1996 after some 28 plus years.  During this period of time I received such awards as the “Lunar Honor Roll” with Boeing, with Delta Air Lines I received the prestigious “Delta Customer Service Award” for service above and beyond the call of duty.

I began my political career on August 21, 1981 as the Mayor for the Town of Woodworth with an appointment by Governor Dave Treen and following that, I have had eleven successful elections.  I began full time service as Mayor on July 1, 1996, and still serving.  I am a past president of the Louisiana Municipal Association, still serving on various committees and conducting seminars within this organization, namely “Mayor’s Court Procedures”. I also serve on a statewide mediation team as it pertains to Mayors, Council Members and Chiefs of Police.  I have previously served as chairman of the board for the Renaissance Home for Youth; Past President of the Rapides Senior Citizens, Inc.; Past Chairman of the Rapides Area Planning Commission, still serving; currently serving on the Louisiana Commission on Law Enforcement’s POST Certification Review; Law Enforcement Executive Management Institute Board (LEEMI); Chairman of the Rapides Mortgage Finance Authority; Board of Directors of the Louisiana Community Development Authority; Chairman of Horizon Independent Living for Seniors and President of Risk Management, Inc. I currently serve on the Opioid Abatement Administration Corporation as Vice President. I have previously served on the Louisiana Municipal Employees Retirement System Board. I have been recognized by the State of Louisiana with the “Order of the Pelican” for tourism promotion and as an “Honorary Economic Development Ambassador” for my promotion of economic development within our state.

In my service as Mayor for the Town of Woodworth, the Town has received numerous awards, such as, Outstanding Small Municipal Water System, Outstanding Small Municipal Waste Water System, Recycling Recognition, LMA’s Basic Services Award, LMA’s Economic Development Award and Basic Services Award, Cleanest Cities Award, Water System of the Year, Waste Water System of the Year Award, Keep America Beautiful, Inc. Finalist Award, and the Addy Award for our Website development, plus many others.  During my tenure as Mayor, the Town of Woodworth has received thirty-nine (39) clean audits. Also, the Wesley Conference Center, the Twin Lakes Campground, and the Alexandria State Forest Wildlife Management Area in conjunction with the Louisiana Department of Wildlife and Fisheries have recognized Woodworth for its support and contribution. Woodworth has been recognized as having one of the best equipped and trained police department and fire department for a small town.  During Hurricane Gustave, the Office of the Mayor, Police Department, Fire Department and Municipal Employees were recognized by a large number of our citizens for going above and beyond the call of duty.  We were tested during this time as a team.